The various parts of the front of a bespoke jacket are normally sewn together by hand. This hand ‘padding’ attaches the canvas that give the chest its structure, and hand sewing shapes the lapel too.

It’s often used as a sign of ‘real’ bespoke, along with creating a personal paper pattern. Very few ready-to-wear suits have it – so very little made-to-measure has either – and as a general rule of thumb this twin definition works.

However, as you might expect, there are nuances and exceptions. The point of a personal pattern is not that it is an end in itself, but that it suggests there will be a good amount of alteration during the fitting process. We covered that in a previous article in this Anderson & Sheppard series here.

Hand padding is the same. Because it’s so labour-intensive, it is a decent sign that other, less obvious handwork will also go into the suit. The fact you can see those pin pricks on the underside of the lapel suggests the iron will also have been used to shape the jacket in more subtle ways.

And then there are exceptions. There’s a good argument, for example, that there’s less point in hand padding with a lightweight make of jacket, as you get from tailors in the south of Italy.

The role of padding also varies with the style of a jacket. Henry Poole pads its lapels by machine, but does the chest by hand; Anderson & Sheppard prioritises hand-padding the lapel because unlike Poole, it wants a more rounded and rolling style to its lapels.

As with any complex craft, there are levels, and once you get beyond the first one or two even the tailors start arguing about the point of parts of the process.

However, none would argue that the shape of my Anderson & Sheppard jacket – which is the focus of this mini-series – would be possible without hand padding.

This point of this article is to illustrate them, with the help of coatmaker Frances (below), who put together the stonewashed-linen jacket we’ve been following through the series. 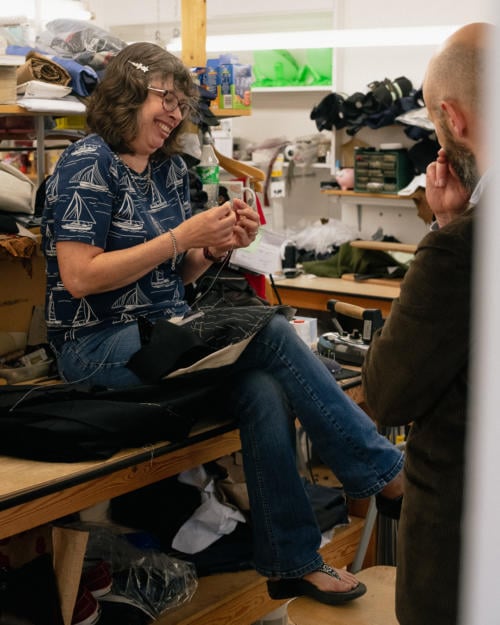 Frances works in the roof of 11 St George St, the longstanding tailor’s nest that has Whitcomb & Shaftesbury on the floor below. It’s five minutes from the A&S headquarters on Old Burlington Street.

The roof is great for coatmaking, as there’s plenty of light – half the ceiling is skylights. But this also makes it warm, and the four flights of stairs dissuade all but the most necessary trips to the outside world.

Frances sits on her bench as we talk, padding the chest of a jacket across her knee. Tailors tend to do this because it gives natural shape to the chest as they sew, zig zagging across the layers of material.

But it’s also good because you have to be close to the garment, making use of both hands. The finger of one hand feels the prick of the needle pushed through by the other, before redirecting it back up.

“It’s hard on the fingers,” says Frances, showing off the callous on the finger responsible for feeling the tip of the needle each time. 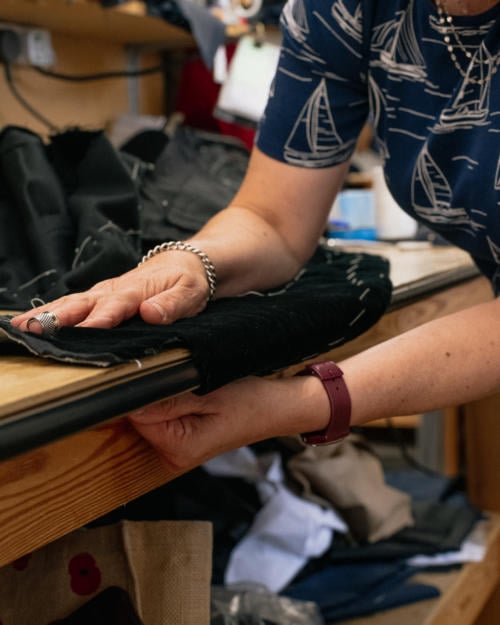 Frances will get down from the bench when she’s shaping a lapel, however, because she likes to do that around its outside edge.

You can see that in the photo above. When this is done, you can see the effect this and the hand sewing has on the roll of the lapel. 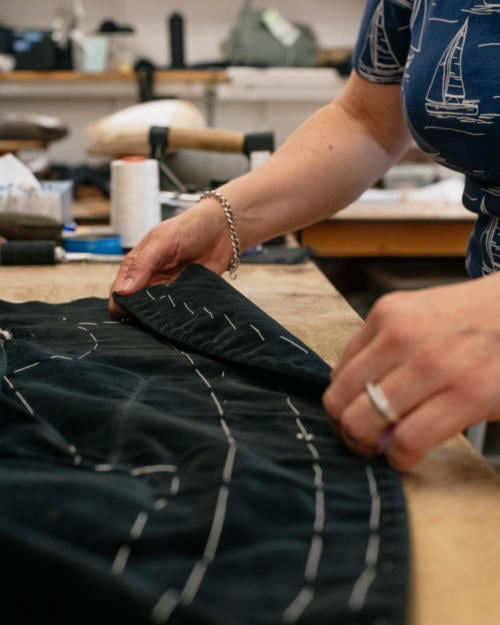 Anderson & Sheppard has always been known for ‘soft’ tailoring. I put that word in inverted commas because since the growth in popularity of southern Italian tailoring, A&S is far from the softest around – just one of the softest on the Row.

However, there is a substantial difference between A&S and its more structured peers in London. For example, the padding on the lapel of an A&S jacket doesn’t run right to the break line (the line where the lapel folds over) but stops a little short. This means it rolls more easily, and doesn’t stay as sharp.

Context is important again, because that rolling is still less than a Neapolitan jacket. Personally I like how the lapel rolls on a two-button A&S, but prefer the three-button roll on a Neapolitan, largely because it seems to fit more naturally with a Neapolitan’s straight lapel.

I’ve tried both with A&S, and opted for two buttons with this current jacket for that reason. You can see the roll in the image below, taken during a fitting. 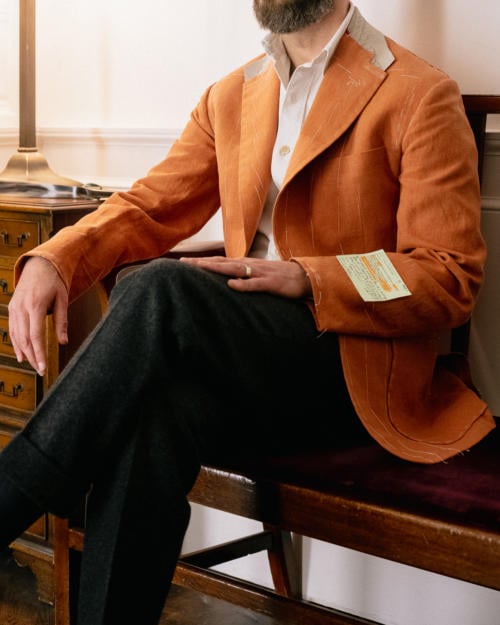 أفضل الإطلالات – Inside The Closet

There are other small differences too, such as the fact A&S doesn’t run the canvas under the armhole of the jacket. This makes it more comfortable, but detractors would say less clean.

Frances also pointed out the way she sews by hand around the inside edge of a collar canvas (below) to shape it. Some tailors do this just with an iron, but Frances says that can drop out over time, so she prefers to draw it in with sewing. 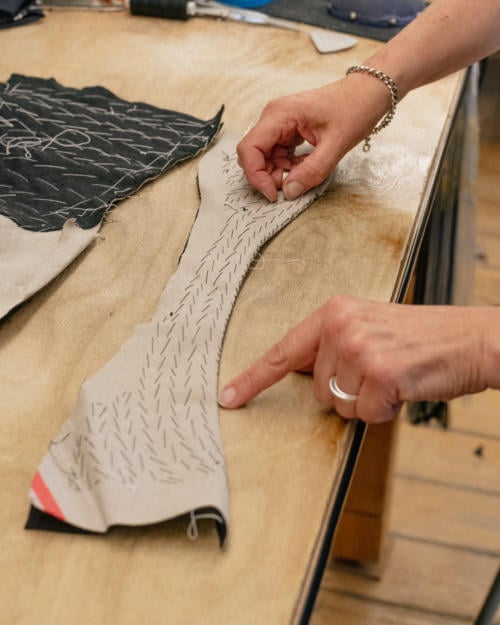 It’s hard for tailors to specifically compare techniques, because few use more than one, or see customers from multiple tailors in order to compare them. Even as an experienced customer, so many different crafts combine in the final garment that it’s often hard to say something was specifically caused by one technique.

Tailors tend to stick with what works for them, and Frances has certainly been doing that, after more than 30 years with A&S. In fact, the other tailor in the workshop when we visited was her son, who joined the industry a few years ago.

“I started off working in the West End, but then worked from home when I had children,” explains Frances. “Then years later my son wanted to apprentice here, so I came back in. Now we’re here everyday and it feels like nothing’s changed.” 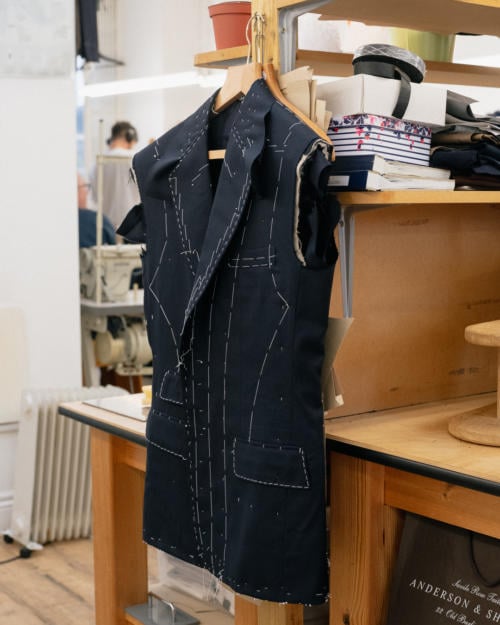 This article is the fourth going in depth on the bespoke tailoring process, in the same way Permanent Style used to do when it first started. Those posts were shorter, but still, we did once do 13 posts on my first pair of Cleverley shoes.

The previous three articles in this series are:

The last piece will focus on the final resulting jacket. 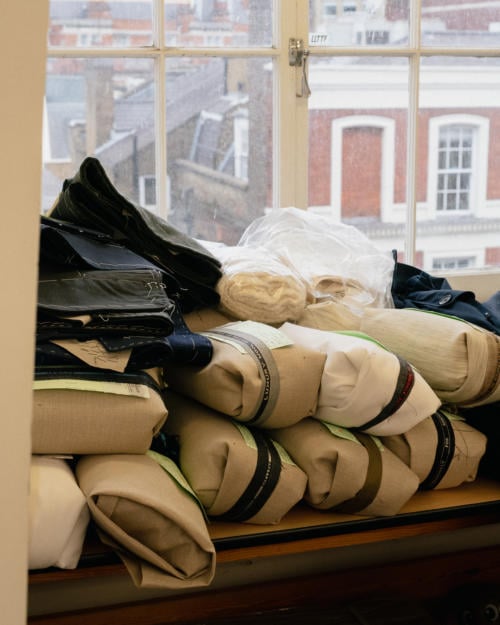 Have There Really Been Major NFT Advancements in the Last Year?