Get To Know the Brain Behind WE DROOL

FilCan Music is making a buzz internationally and I want to be able to connect to different FilCan artists to ask them questions about their background and inspiration. I believe it is very important to be able to relate to an artist journey. I was lucky to have a chance and ask questions to Toronto’s Battle Rapper, Santo. Here’s what he had to say:

Tell me about you and how you got into the music you are creating now?

I’m 22 years old. Born in Israel, moved to the Philippines when I was 7 years old and finally moved to Toronto when I was 12.

There is no real defining moment how I got into hip-hop, to be honest, but I do remember just liking the sound of it you know? I remember buying those pirated rap albums at the local market stalls for like 20 Pesos at the time then I would play it at home and write the lyrics down into my notebook in order to memorize the songs since Youtube was around but not as accessible back then.

I had friends who were really into breakdancing and I was never much of a dancer so I figured I’d stick with what I can do better and just enjoy listening to the words and how they were constructed. Let’s face it, Filipino hip-hop specifically back then, may not have been as crazy lyrically as it is compared to now but it always held meaning behind every word said which I think is super dope.

Are there any obstacles you had to face so far in your Hip-hop career and how you mastered them or trying to master them?

In terms of hip-hop career, I have made music and I will be releasing music coming up hopefully by 2021 but I mostly have focused my time into rap battling because honestly I think that is what I do best and I can confidently say that I am improving with every battle and having fun while doing what I like to do. In terms of obstacles, there is the way people try to discredit the things I have done. They choose to ignore what I have actually done for the FilCan movement (most times they don’t even rap themselves which is quite amusing to me) because I mostly rap battle rather than focus on music.

People choose to paint me as a villain and I love it but at times it can get a bit overwhelming. I have a lot of people who don’t personally know me but talk behind my back even without knowing me or certain facts about the story. But its a part of the journey. People will hate what they don’t understand and that’s fine by me. I’m not losing sleep over it at night because the real ones know who I actually am and what I’ve done so that’s that.

If there is a song that would be an introduction to Santo music what is that song?

Doubts Long Gone from my Progress EP. it may be older but it’s one of my favourites from my own songs because it’s very raw with the emotions.

It was done around the time I almost quit but I chose to tell my story rather than make music for other people to gain their so-called respect. It’s as authentic as one can get once they meet me as a person.

Is there a philosophy behind your music, if so, what is it about?

My philosophy behind my music and my craft, in general, is that I will put who I am into every word in my songs or battle rap verses. I don’t have to fake anything because this is my craft and my story. I’m not here to please anyone or to have them like me. This is Santo. This is Wayne. You can either take it and support me which would be appreciated. But if you don’t like it, it’s fine too. I never talk about things I know nothing about because you can get checked by people anytime to prove you are all that and if that happens, you either gotta put up or shut up.

That is why I keep my music as real to me as I can, it’s an intimate thing when you can have people connect with you on a different level ya know? Anyone can make bangers with crazy good beats and minimal words they mumble, but not everyone can have the crowd listen and feel what they have to say. That’s what I aim for.

Share with me something that you’re working on improving, and how you think it will be better once you’ve accomplished your goal?

Two things I am working on as an artist is my time management and my promotion work. My time management because things can get crazy busy for me as I work two jobs currently and I’d usually be tired by the time I come home. It’s hard not to procrastinate when that happens so I’m working on that. 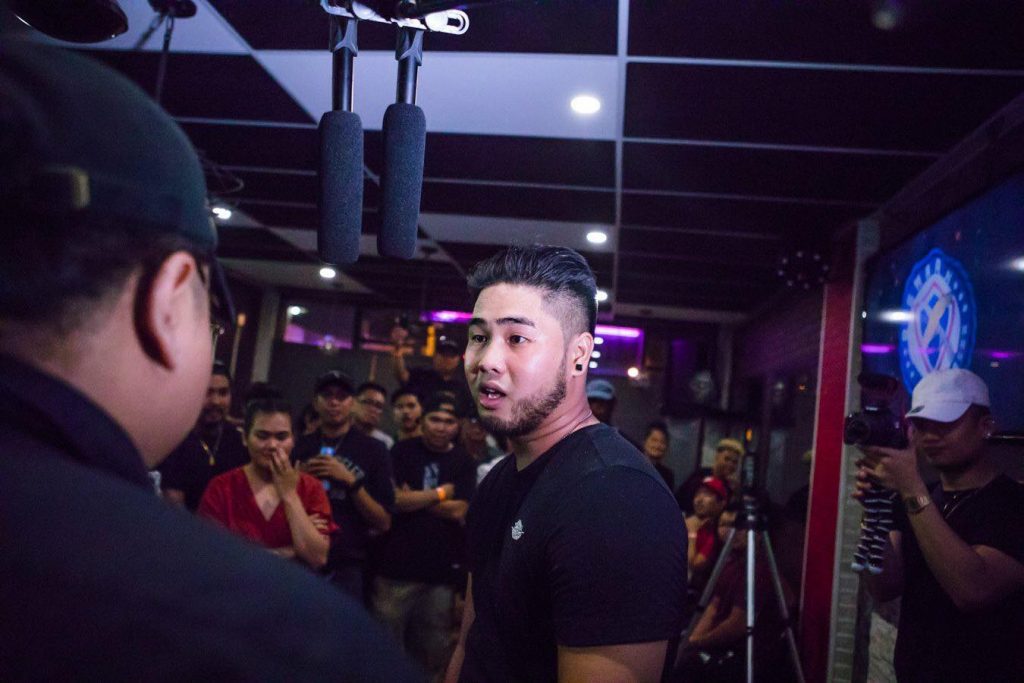 My brand promotion is another because I don’t really spend on promoting my music or battles as I see it as a waste but now that I have a better grasp on the knowledge of the industry, its never a bad thing to invest on yourself because in the end, if everyone else leaves, all you’ll have is you. So I’m trying to bet on myself because I know one day it’ll make a big impact on me, not just as an artist but as a person as well.

Share with me your vision of your hip-hop career

My vision for my hip-hop music career is to make music people will relate to. Secondly, my vision for my rap battle career is to be a pioneer of Filipino raised emcees to battle in the big leagues overseas. I want to open doors for young Filipino emcees like me to battle and pursue it if its a passion. Look at me, at one point no one cared I did this. Now, I’m slowly creating a name for myself in the battle scene. The dream is that I want to hopefully battle in Fliptop back home and in King Of The Dot here in Canada as they are two of the biggest rap battle leagues in the world.

I want to be considered one of the best to ever battle rap. I am taking it step by step right now. I’m getting booked all over Canada whether for Tagalog or English rap battles and I am constantly working to improve until I solidify my legacy as one of the best to ever do it. It may sound far fetched to some, but that’s fine by me. I know how hard I’m working on my craft so I know where I’m trying to go with it.

Here’s how you can connect with Santo

Get To Know the Brain Behind WE DROOL